Chrisj
Mid forties act like I'm mid teens. Two kids but that's two too many, though they're both teenagers now so they should be able to stay out of trouble.

Another year of inactivity 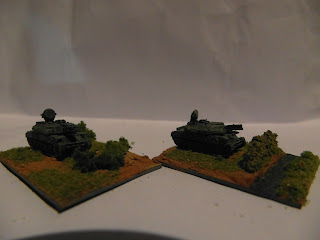 Well over a year since my last post. A lot has happened I'm now a Granddad, a lovely baby girl born on Christmas Day, delivered by my wife and myself after the ambulance didn't quite make it on time. I've changed employer again, it's getting be something of a habit, started playing FOGR and participated at Crisis Point, a multi-player 6mm Cold War game played to the Cold War Commander rules which was a very enjoyable event with a follow up game Arctic Strike planned for this year. Both games are set in 1985 with a Cold War turned hot background.

The game is planned to take place on the 13th and 14th of April with 18 players split between NATO, WARPAC and neutrals. The venue is Dungworth Village Hall near Sheffield with some new players as well as some of the participants from last year.

The game is set in Norway with the Russians managing to piss everybody off including the Finns and Swedes in their attempt to capture the country. For those who know the CWC rules there are some variations with provision made for repair, electronic warfare and medical units. This was to encourage players to produce more unusual units with the repair and medical units units providing the chance to recover lost bases overnight between the two days play and the electronic warfare unit allows for a command bonus if a successful roll is made. LORI's exist as supply units and if you allow your command stand to lose it's LORI's either as loses or not getting them back up from your supply dump you suffer a command penalty.

Air superiority is decided by the respective sides allocating fighter units to particular sectors so if events dictate it you can throw everything into that crucial sector. Ground attack aircraft are allocated at random each turn with the controlling side deciding where to use them. Each side has a rear area table which it has to defend as its supply depots and artillery parks are situated there.

Last years game saw a hard fought WARPAC victory in a relatively straight forward attack/defence game, this year NATO will still be on the defensive, but it is envisioned that they will be given sufficient points to carry out offensive action on the tables they see as critical to their victory.

Visitor are more than welcome and with a local hostelry serving outstanding home made pies and a nice pint you could make a day of it. You will also get the opportunity to meet some very friendly wargamers, last year considering the majority of us didn't know each other things went very well with no arguments or rule disputes.
Posted by Chrisj at 17:26 No comments: 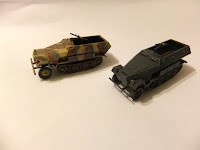 I have for want of a better word drifted into 15mm WWII, it all started innocently enough with a couple of the Zvezda 1/100th scale models for Art of Tactic. At £2.50 each it seemed such a bargain, get a couple to build up and paint, just for fun rather than any intention to get into a new scale. So I got a Panzer II and a T-26, they went together really easily and when painted up looked really nice. Next was the T-34, followed by the PSC Russian Infantry and T-34 box set with five models and before I knew it a couple of Sdkfz 251 and Opal Blitz trucks because you can't have one side without an opponent, FIB mortar and MG teams followed along with Gaz trucks and a couple of BT-5s. And much to my shame the Battlefront Russian Infantry, but they were at £30 rather tan the usual £40 plus. 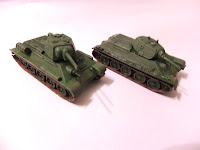 So now I sit with about 300 figures to get painted and at least half a dozen vehicles to build and paint. They were the priority project being as I had bought them I should get them completed and some use out of them. However the Alder 6mm Russians I picked up at Triples are now top of the list because of the BKCII game planned for the first club meeting after New Year which I am supposed to be running. 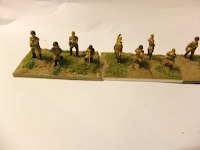 Here are a few photo's of the Arab Israeli armour I've currently got based.

BMPs and T54 with the chinchilla sand and paint mix. 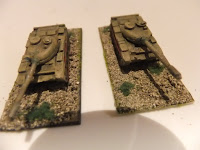 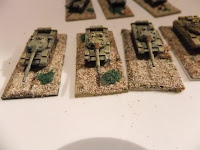 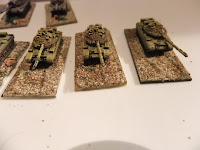 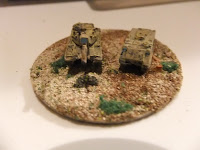 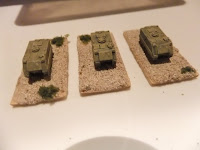 M113 with plain chinchilla sand too light and lacking in texture so due for some new bases.
Posted by Chrisj at 16:25 No comments:

An update woohoo as my daughter would say. Bought some 6mm houses from Najewitz Modellbau which I have to admit provides an excellent service, models ordered on Saturday from Germany and they arrived Friday. Well I would have got them Friday but even free post they were a signed for delivery, no one home and going to Paris on the weekend so I had to wait another week to collect them.

Some pics of the models. 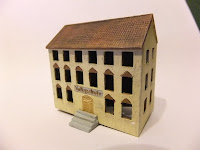 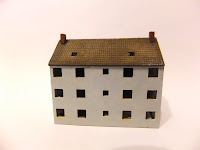 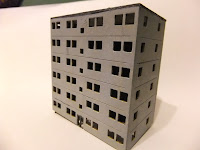 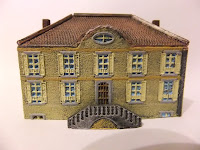 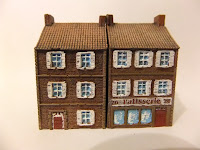 The first three are cut from a very thin MDF like material the others are resin cast and very nice models. The only thing that really needs doing is to insert an interior to make them feel a bit more solid, but they go together well using PVA glue which seems to dry very quickly .

http://www.lasermodellbau.de/
Posted by Chrisj at 15:23 No comments: 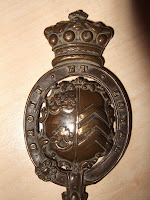 My father in law has this badge which he is attempting to identify. Any assistance would be welcome
Posted by Chrisj at 15:43 No comments: 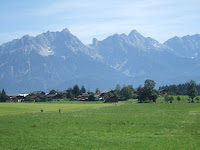 I went on holiday to Austria in August and what a beautiful country it is. We stayed in the area around Saltzburg and being a wargamer I naturally looked at its potential as a setting for scenario's, the nature of the terrain in the western part of the country in particular, long valleys surrounded by mountains. Ideal for games where a WARPAC force has to fight it's way along the main roads in the valley bottoms. Kurrasiers and M60's fighting to stem the advance of the Russian hordes. The cogs have been turning ever since and I've just got to give it a try. 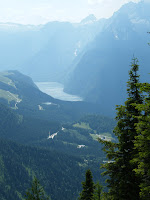 With a country this like this to devastate and the terrain providing naturally defined battlefields where can you go wrong.
Posted by Chrisj at 18:19 No comments:

Is it really that long.

Well it's been an age since the last post. Things have been progressing quite well with the BKC stable of games. FWC has now been added and we have played a few games.

The terrain has been improved and expanded with a variety of fields, trees and buildings, some my own card buildings and some resin cast. 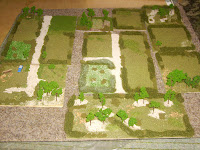 A selection of fields, the rather white looking area's don't look too bad in natural light but the flash does tend to lighten them up a bit. 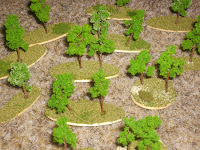 These are the cheap as chips Chinese trees sold on Ebay and although they aren't brilliant at less than 10p each and used en masse they don't look too bad. The edges of the bases on the fields and tree bases require painting but until I get my new boards completed I'm still not sure what colour to paint them.

I'm still waiting for the release of the new BKC book and so are some members of the Kirklees Crusaders a club I have recently begun attending. They meet Monday nights at Patriot Games Wood St Huddersfield and are a friendly enough bunch and play a variety of games. I still attend the club at Claremount Cons Club on Wednesdays so two nights a week wargaming is pretty good, just need to find somewhere for the other five nights to make my wife a true wargames widow. The only snag would then be finding time to paint up new figures.

My old club at Scunthorpe is running a games weekend on the 3rd and 4th of Octber and I'm hoping to run a large CWC game which should provide a some new content for the blog. I started gaming at the Scunthorpe Club which has undergone several incarnations but is now probably in the healthiest condition it has ever been. A lot of members and a dedicated room at the Grange Farm Hobbies Centre so in theory available seven days a week. Paradise!.

The Scunthorpe Club still holds fond memories of Modern Campaigns and some characters who have influenced my thinking on wargaming in general. It is rather sad that I've lost touch with some of them.

I've got some more photo's of terrain to post when I manage to find them so hopefully I'll be able to maintain some momentum with the blog but things have changed a bit over the last few months with a new job and my daughter going away to university which I hope she will find a fulfilling experience.
Posted by Chrisj at 19:19 No comments: